Year of the Rat Silver Coins 2020 marks the beginning of the Year of the Rat, and a new Chinese Lunar calendar cycle. The Rat is the first of 12 animals to appear in the lunar calendar. The Chinese Lunar calendar follows the moon's cycle instead of the sun, with a 12 month year and a 13 month leap year. The Lunar calendar that is celebrated in the Perth Mint's Lunar cycle silver coin series is the Chinese Zodiac cycle, where each year is represented by a different animal. These include: Rat, Ox, Tiger, Rabbit, Dragon, Snake, Horse, Sheep, Monkey, Rooster, Dog and Boar.

Today the Georgian calendar is primarily used worldwide, however the Chinese lunar calendar is still used to recognise certain holidays and festivals. Many people also like to follow the Lunar Calendar for its horoscopic like predictions.

The Year of the Rat

The Year of the Rat is also referred to as the Year of the Mouse. These coins feature an image of two rats standing on two ears of corn. One Mouse's tail is curled toward the bottom of the coin, and the other mouse's tail curls towards the top. Both mice sit upon a single ear of corn, while eating kernels from the second ear. One mouse holds a kernel of corn in his claws, while the second picks one off with his teeth. The word 'Mouse' is written on the right of the image, with the year '2020' located just below. This image is the same on all sizes of the Lunar III series silver coin. 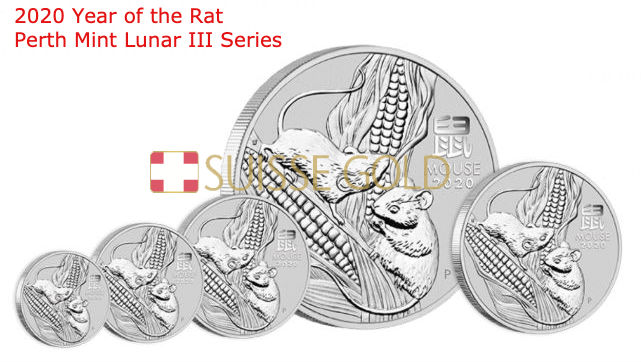 Other Bullion Manufactured by the Perth Mint

Perth Mint silver bullion is available for VAT-exempt Swiss storage or for delivery. For clients requesting vault storage, SuisseGold.eu offer one year of storage free of charge from the time the order is placed. Clients who select storage may, at any time, select to sell their bullion back to SuisseGold.eu at favourable rates. Clients may purchase bullion in any of 15 currencies.