The United States Mint is responsible for making all US coin currency, in addition to US backed precious metals coins. The US Mint operates out of a number of branches, including Philadelphia, San Francisco, Denver and West Point, however it's original branch was located in Philhadelphia. American issued precious metals coins are very popular and have gained a following, particularly among North American precious metals investors.

A History of the US Mint

The US Mint was initially founded in 1792 for the purpose of issuing American coins. At this time Philadelphia was the American capital, and it is for this reason that the first US Mint facility was located there. The mint has continued operations since that time. Initially, most coins issued for circulation had gold or silver in them. The US MInt was also the first US government agency to employ women.

In the 1850's, the US Mint opened locations in San Francisco in response to the gold rush, which had brought a lot of people to the west in search of wealth. The San Francisco branch was opened for the sole purpose of buying in gold from miners and converting it into coins.

In response ot the large amount of gold that was being refined by the US Mints across America, there was a need for a bullion depository - a place to store the metal. In the mid 1930s, Fort Knox opened in Kentucky.

Since that time the United States has continued to refine and manufacture gold and silver bars and coins on an institutional level. In the mid 1980's, it became apparent that there was a demand for retail gold and silver coins among individual investors looking to buy gold coins in smaller quantities as part of an investment portfolio.

All American Eagle gold coins contain a gold purity of 999 fine. United States Eagles issued from 1986 until 1991 were issued using Roman numeral dates. From 1992 onwards, the dates were issued in Arabic numerals.

The design on all gold American Eagle coins is always the same. The front of each coin features an image of Lady Liberty walking with the sun rising behind her. She carries a torch in one hand and an olive branch in the other. The reverse of the coin features a male Eagle bringing branches back to his nest, where the female Eagle is sitting.

The design on a silver American Eagle is similar to that of the gold one - the front of the coin features an image of Lady Liberty walking, with the sun rising behind her. The reverse features an Eagle perched behind a shield. 13 starts representing the 13 original colonies are located above the Eagle's head.

The American Buffalo Coin was only released in gold, and only in the 1 Ounce size. However, unlike the Eagle series, all gold Buffalo coins contain 99.99 pure investment grade gold bullion. It is the first and only 24 Karate gold bullion coin issued by the US Mint. The front of each coin features the portrait of a Native American Indian Chief - the design of the coin is modeled after the original American Indian Head Nickel, which was originally issued in 1913.

The reverse of the coin features an image of an American Bison, or Buffalo. All gold American Buffalo coins have a face value of $50 USD. Amerian Buffalo gold bullion coins are sold sealed in plastic sheets of 20 pieces. 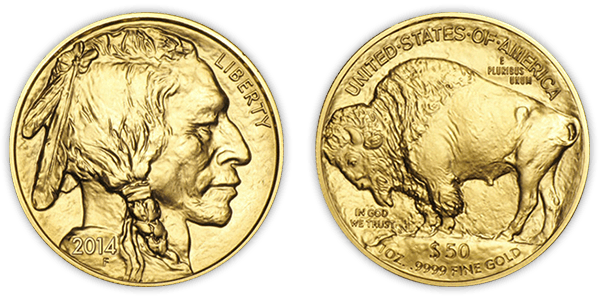 How to Buy US Mint Bullion Coins

For clients interested in purchasing any US Mint products, including the American Eagle coin in gold, silver or platinum, and the American Buffalo coin in gold, these coins are directly available from SuisseGold.ch. Via Suisse Gold you may pay for your order in any of 15 currencies, including Euros, US Dollars, Swiss Francs and Pounds Sterling. SuisseGold.ch also accepts payment in several cryptocurrencies, including Bitcoin and Ripple. Any client may place orders for US Mint issued products for delivery or for vault storage.

Please contact us if you have any questions or require assistance with your purchase.