Does the European Market Affect the Silver Price?

Before looking at the connection, take a guess. Would you guess that searches for the ECB have a large influence on the price of silver? Such a situation is possible in that interest rate decisions and economic projections produced by the ECB are closely watched by financial markets.

On the other hand, other factors may outweigh the ECB’s influence, including such things as attention to the Federal Reserve, global inflation measures, and indications on industry demand, such as wedding demand out of India.

Take your guess now – ECB heavily influential on the silver market or insignificant?

First, here is a look at searches for the ECB on Google from the end of April to July 23rd. The index of Google searches for the ECB ranges from 0 to 100. The peak over the months shown occurred on June 11, 2018. This was the day the ECB said they would end their massive purchases of mostly government bonds in December (also known as quantitative easing). Other influential days included May 21st, May 8th, May 6th, May 11th, and July 10th.

The Price of Silver

Putting the Two Together

The following figure overlays the two. Are you surprised by what it shows? Interestingly, it is difficult to see a connection. The second graphic below puts the price of silver on a day-over-day change. Unsurprisingly, the relationship is still difficult to see. Interestingly, on the day when the peak ECB day (June 11, 2018), the price of silver moved slightly, but spiked up a few days thereafter.

The visual look did not appear very promising. The following does some econometric modeling to see if there is any impulse response. Unsurprisingly, the ECB searches show as insignificant in predicting movements in the price of silver. 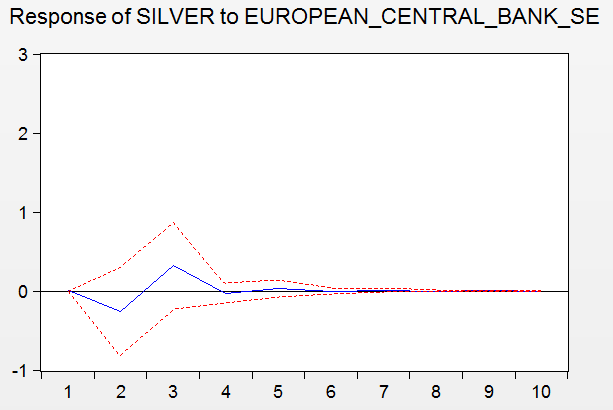 In looking at whether Google searches for the ECB provide any insight into predicting the price of silver, the results are disappointing. Perhaps the ECB is less influential that many think, at least when it comes to moving the silver market.