Gold and Silver During a Recession

Gold and silver investors like to buy precious metals to help secure investments in recessions and other financial crises. But is it worth it? Does it benefit your portfolio if you diversify and place 10%-15% of your wealth into gold and silver bars and coins?

Stock markets are cyclical. They regularly cycle through periods of growth and recession, normally every 10-15 years. Depending on circumstances, periods of recession or depression can be mild or severe. In 2008, the collapse of mortgage markets and problems with European bank solvency caused a very significant recession that was worldwide, and took years of austerity to recover from, particularly in Europe.

One of the best ways to trace a market in a recession is to look at the S&P 500. This is a good indication of how companies, over a number of different sectors, are performing. Below are the results from 8 different recessions that have occurred since the US Dollar was taken off of the gold standard. 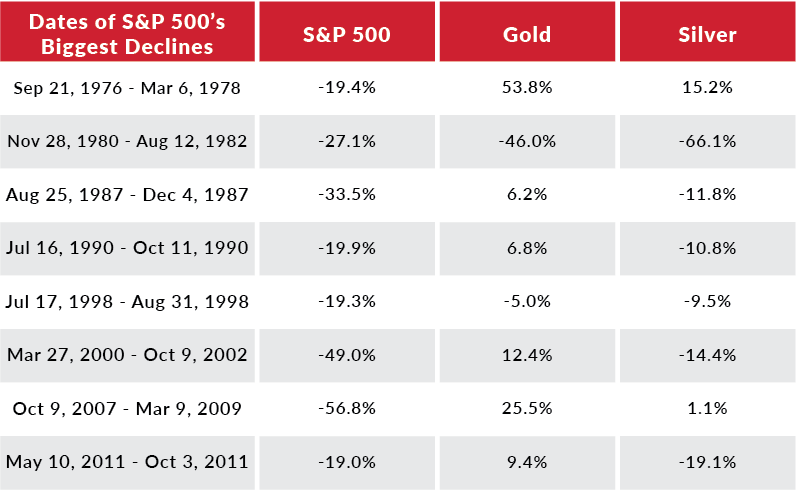 1. Notice that the length of the crash doesn't make a difference. In 75% of all market recessions, the value of gold has increased significantly. Therefore, it can be assumed that holding gold during a recession is a good idea.

Historically the value of gold is sometimes initially pulled down at the start of a recession, however, it is realistic to expect that in most cases it will bounce back, and increase in value throughout the recession. History states that this point may be a fantastic buying opportunity.

2. Gold's only important selloff (-46 percent in the early 1980s) happened just after gold's largest bull market in history. Gold climbed over 2,300 percent from 1970 -1980. Therefore it is not terribly surprising that it dropped with the wider stock market at the point.

3. Silver didn't fare so well during stock exchange crashes. In reality, silver only climbed in one of those S&P selloffs (and remained flat in a second one). That is most likely because of silver's high industrial usage (roughly 56 percent of total distribution). Therefore, a recession in industrial production can cause a decrease in the demand for silver, and also the price. However, it is important to note that silver prices dropped significantly less than S&P averages. It is also important to note that silver's largest increase (+15 percent in the 1970s) happened amidst its largest bull market ever.

The conclusion with investing in silver bullion, is that its price reaction to a recession depends on whether the precious metal is in a bull market at the time of the recession.

The main reason gold is more resilient during stock exchange crashes is due to negative correlation. One goes up when the other goes down.

If the stock exchange drops, fear is generally large, and investors generally seek out security in gold.

It is always a good idea to build a diversified portfolio. This includes stocks, bonds, real estate and precious metals. SuisseGold.eu recommends that clients place 10% to 15% of their assets into precious metals. The best time to invest in gold, silver, platinum or palladium is when the stock market is strong, and precious metals prices are weaker. Investors are then in a position to reap the benefits of a downturn.