The gold market is notoriously difficult to predict because so many metrics play into the price of the metal.

There are obvious factors like supply and demand for physical gold. However, the speculative forces that move gold prices are more important: the Dollar, bond yields, political climate, and central bank action. One factor may move gold prices more than any other: real yields.

The following graph compares the inverted ten-year real yield with the gold price in U.S Dollars. The negative correlation between the two assets is strong. It is undeniable that gold and real yields move in opposite directions. 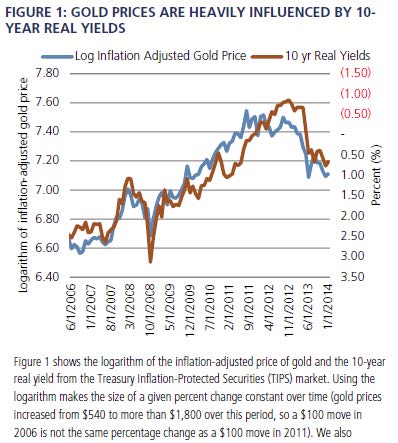 The real yield measures the actual return of a bond or any interest-bearing asset adjusted for inflation. If a bond yields 5 percent, but the inflation rate is 6 percent, the real yield on that bond is negative. In such cases, inflation has reduced the value of the asset by more than it yielded. Likewise, if a bond yields 3 percent, and the economy experiences 2 percent deflation (the opposite of inflation), the real return is 5 percent on a 3 percent nominal yielding bond. Deflation has increased the value of the asset on top of its yield.

When interest rates increase, real yields also increase because higher rates defray inflation. On top of this, higher rates tend to enhance the value of the Dollar by making it a higher yielding asset. Both of these things are bad for gold.

Gold has performed poorly in the latter half of 2016, which is surprising considering the significant potential for inflation in the United States and the United Kingdom, two of the world's largest economies.

In the U.K, a weak Pound will increase the price of imports by as much as 10 percent for a nation that imports up to 60 percent of its goods. In the United States, Donald Trump’s fiscal policy is expected to increase wages and spending in the economy - leading to higher wages and inflation.

These bullish factors are not unknown to the market. In fact, mainstream economists acknowledge the potential for high inflation in the coming years. However, they believe this inflation will be defrayed by the U.S Federal Reserve's December rate hike and not have any impact on the real yield of bonds.

In the short-term, this may be true; however, over the long-term, inflation is likely to push the real yields downward - especially when the full impacts of Brexit hit the U.K economy.