The Inflation Crux is Coming

It goes without saying that the global economy is in one of the most dangerous positions it has ever been in. According to Oxford economics, on average across all covered countries, the ranks of the unemployed are up 67%. In the Eurozone, the number of unemployment is up 21%, while in the U.S., the figure is up 256% for second quarter of 2020.

In no way is this a pretty picture. 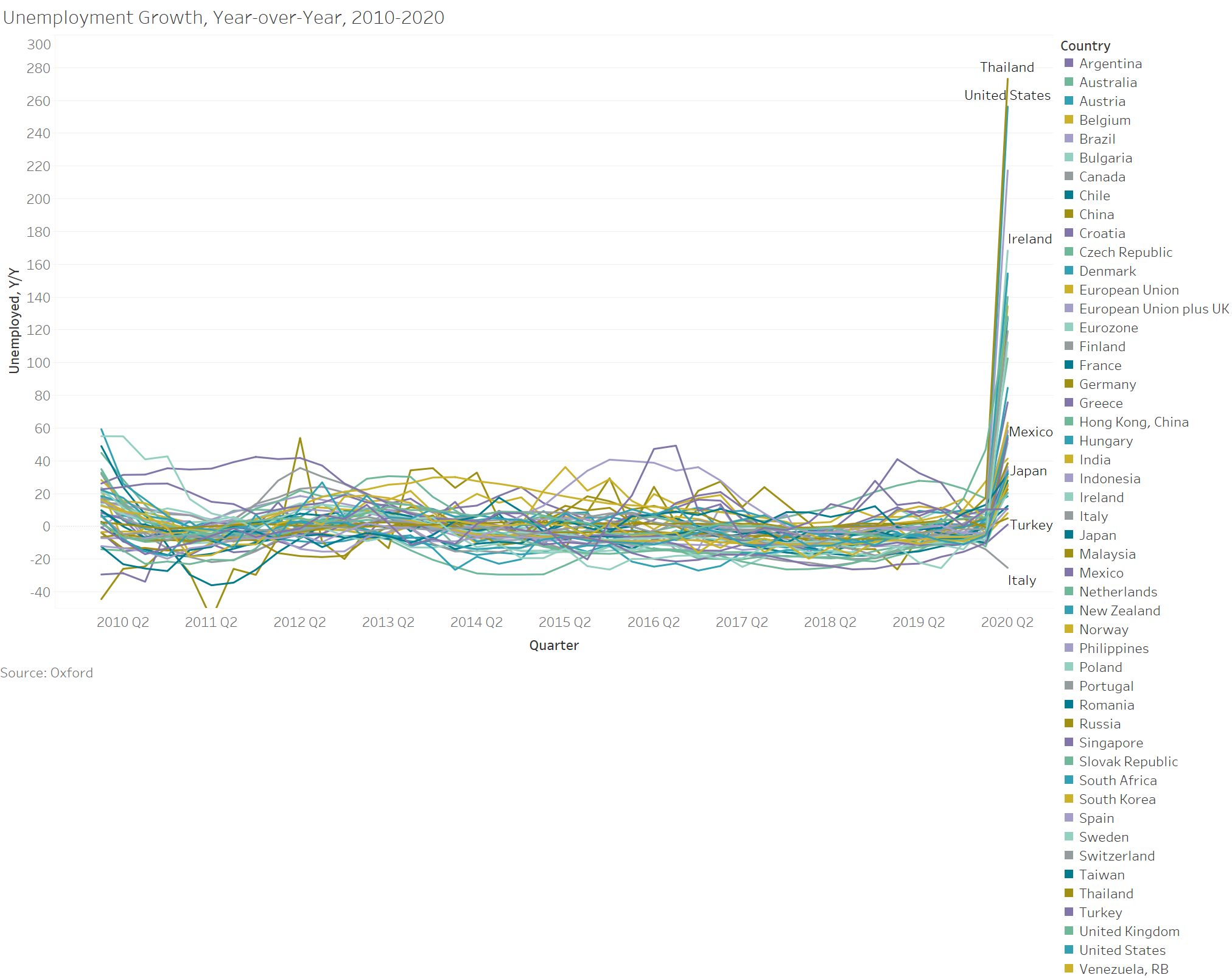 The problem does not look any better when looking at the synchronicity of the global recession. All economies are moving in tandem, and this “lack of portfolio diversity” is generally something new to the economic picture. The following graphic shows this clearly, wherein prior years, there was more diversity in growth. 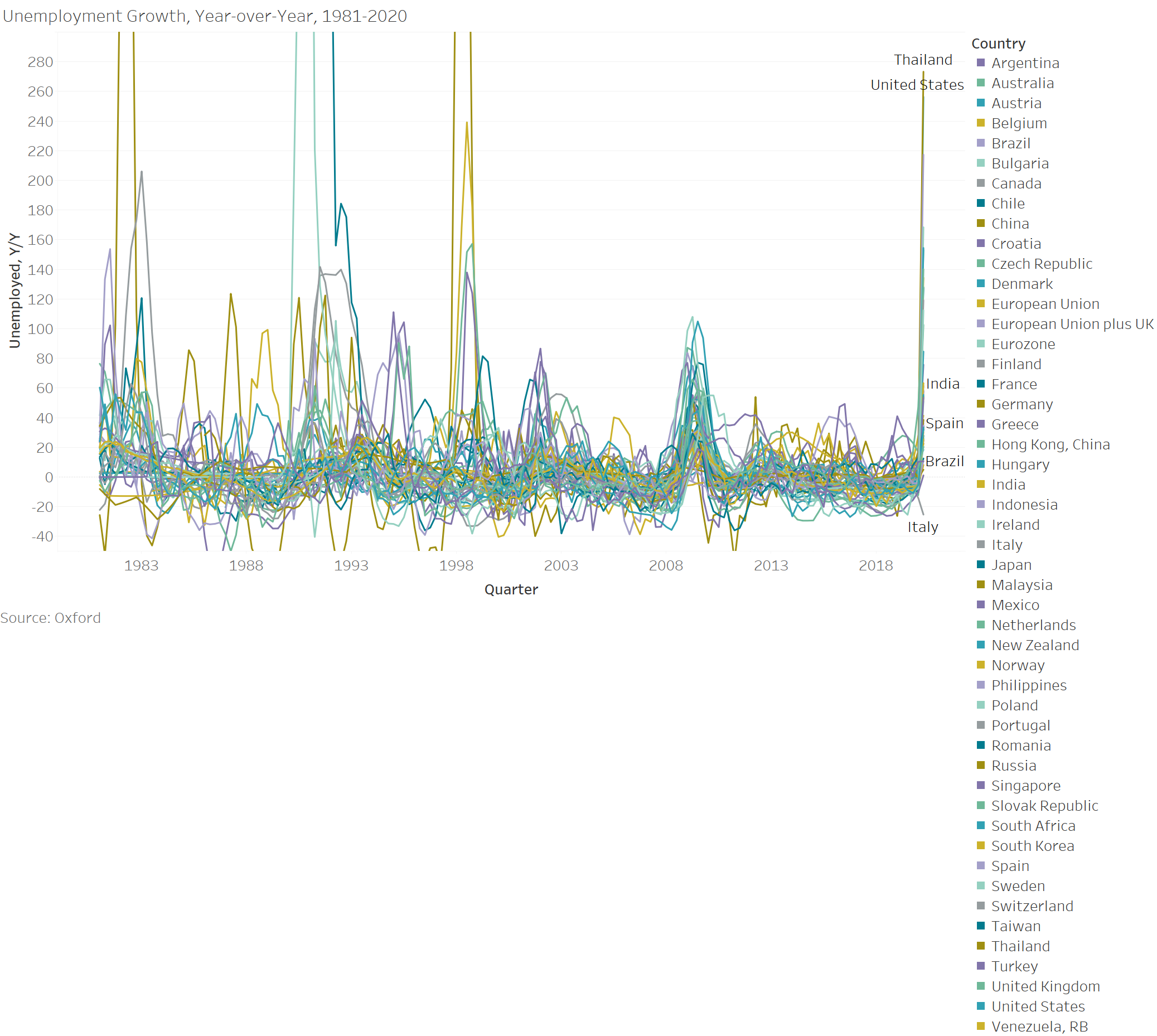 The thinking of some forecasters

The market, unsurprisingly, is betting big on massive fiscal and monetary stimulus to continue for the foreseeable future.

Assumptions about fiscal and monetary stimulus have led many analysts to expect the labor market to come back quickly. The following are Oxford’s forecasts for the growth or decline in the unemployment rate by country through 2024, the year in which it is expected that global economies will be back to where they were before the Covid-19 pandemic. 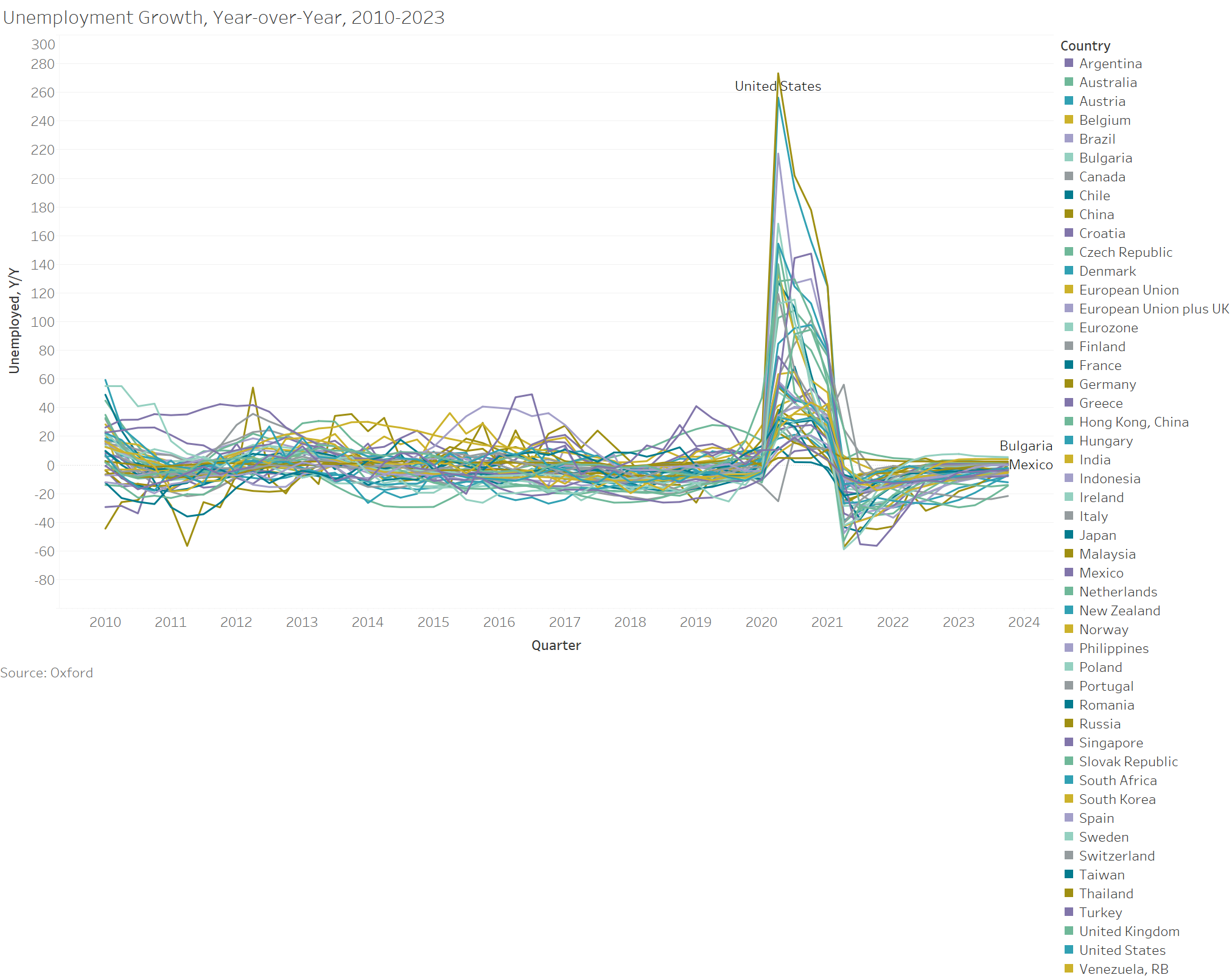 With labour markets around the world in terrible conditions, the inflation backdrop is unsurprising. Disinflation or actual deflation is the norm everywhere. 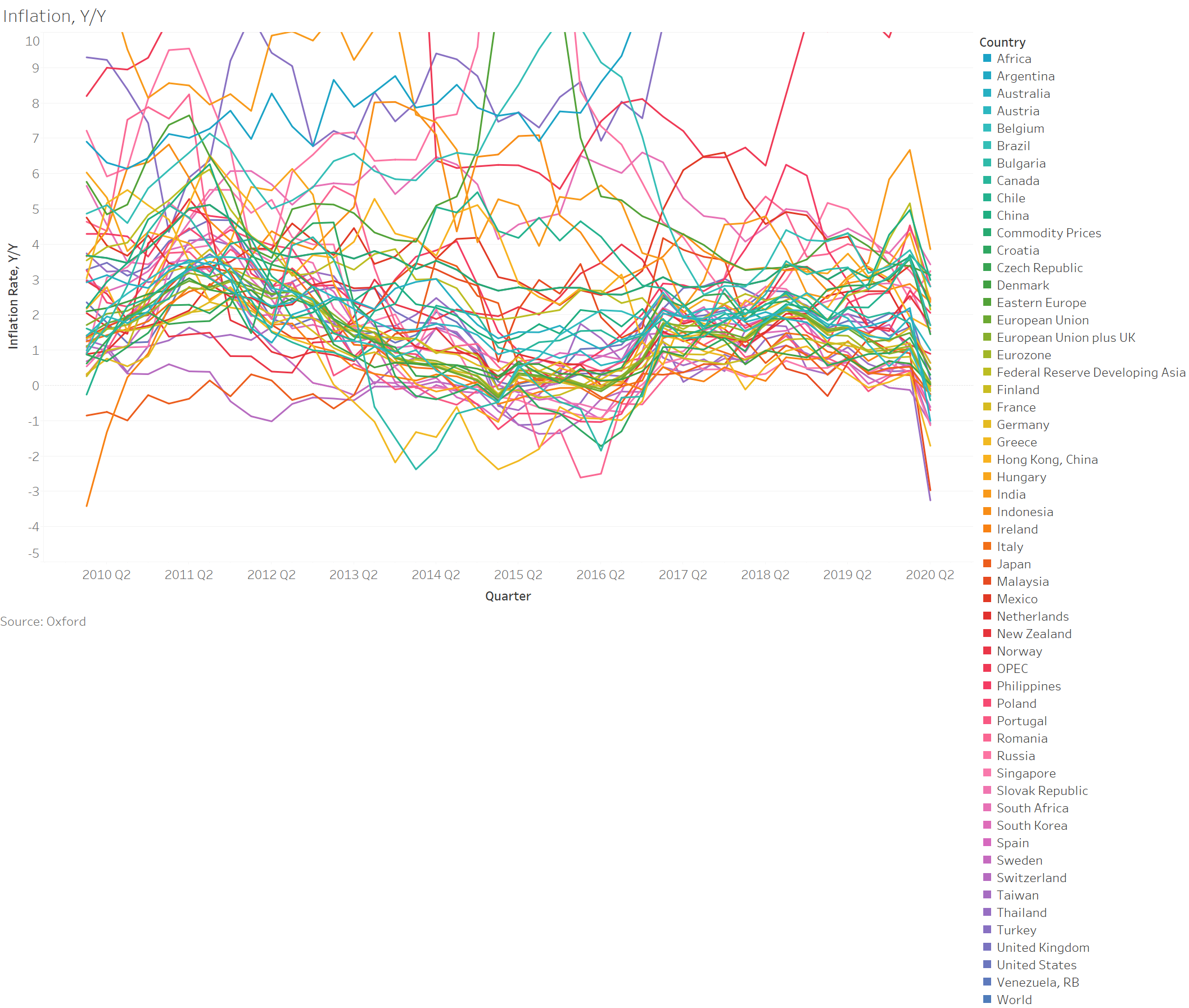 Overall, global inflation is near its all-time low of 2.25% (Q2 2020). The only other time in modern time when inflation was this low was in Q3 2009, right before the onset of the longest expansion on record. 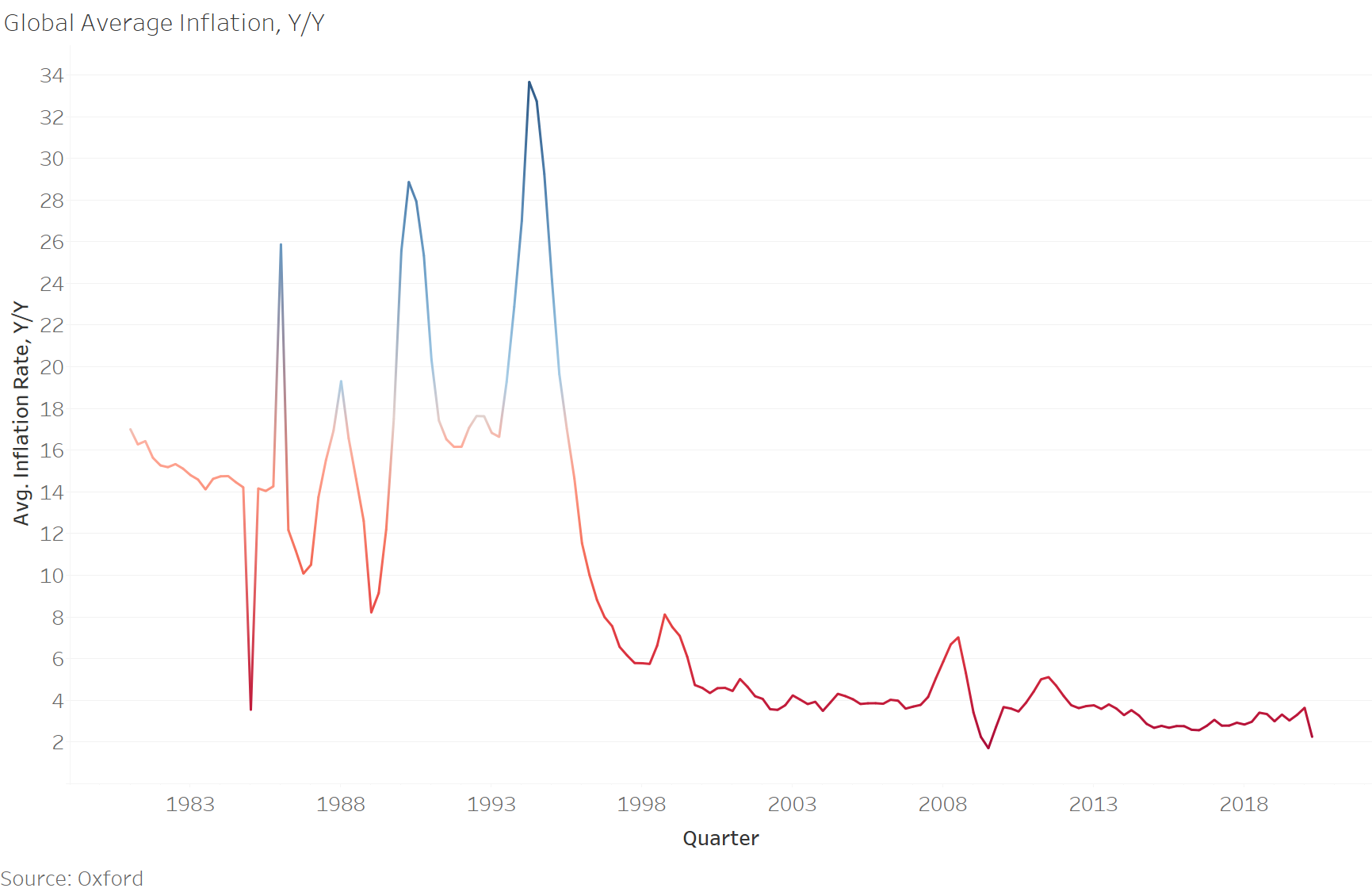 With this background, the issue now is whether global economies can prevent rapid inflation from materializing when economies fail to recover quickly. That is right. The question is flipped. Typically, the concern is that inflation will rise too quickly because economic growth is too strong. The current experience is different. This time should global growth not pick up quickly enough, then governments will be forced to spend more money to support those unable to work and central banks will continue printing money.

The combination of the two government components working together has historically never been a good sign for low inflation.

This time could be different but that is a weak bet for two reasons. First, supply chains may get shorter with the pushback against globalization. Second, the massive size of the spending and money printing operations have never been so large. It is simply massive.

This time is dubious. The following three figures confirm the dubiousness of the situation. First, interest rates will likely never rise to reasonable levels again without too much inflation. Second, central banks will never get their balance sheets down to where they should be. And third, government spending will likely have too much political pressure to make any dent in the massive spending pressures.

Unsurprisingly, the precedents on the topic block now are dangerous, very dangerous. 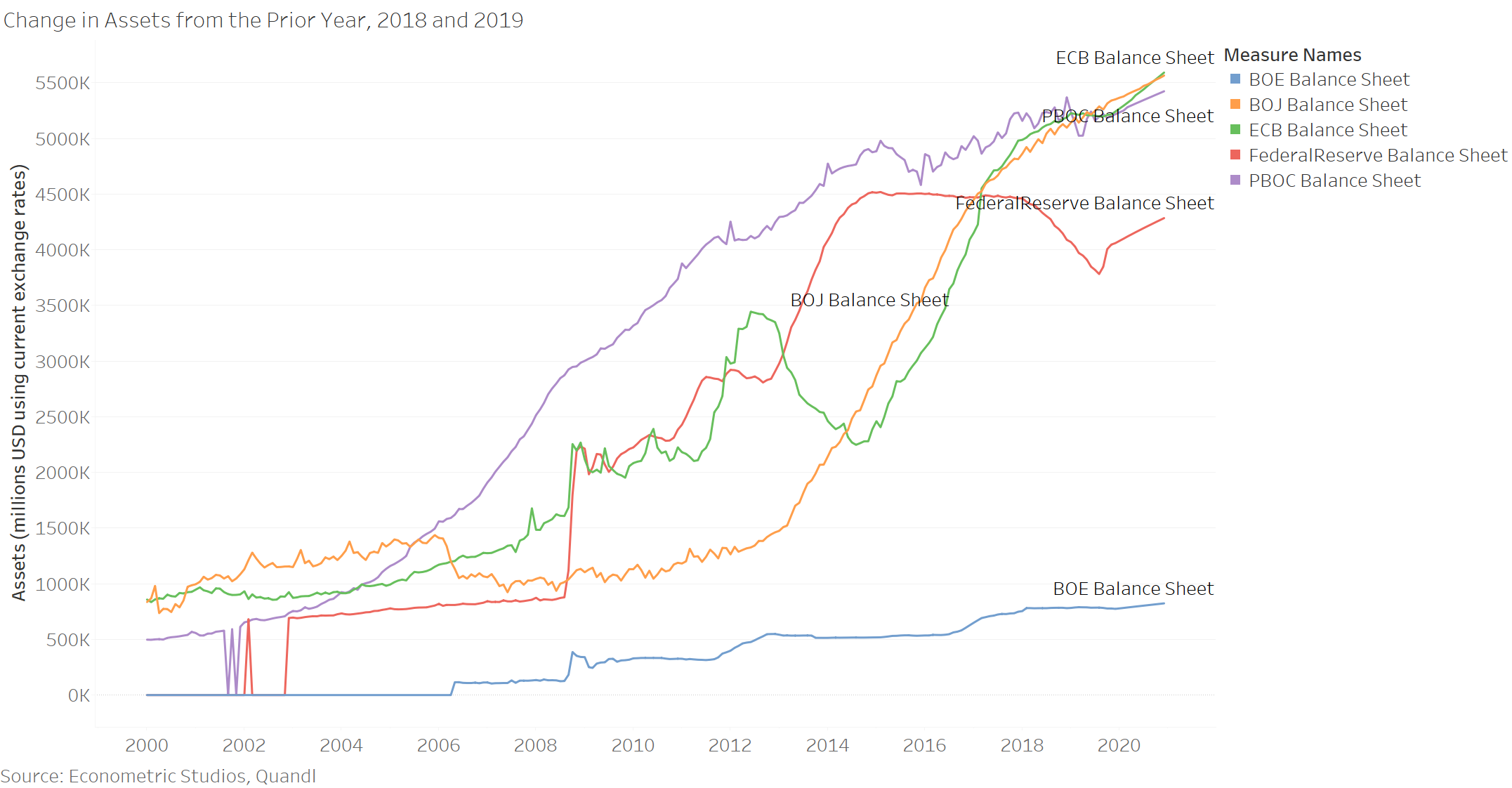