What Exactly is the Gold-Platinum Ratio?

Gold and platinum happen to be two of the most sought-after precious metals on the planet. They not only diversify an investment portfolio but can also act as a safe-haven asset. This makes gold and platinum popular investment vehicles for any investor.

But when it comes down to making a comparative, it is always about long-term and short-term investment goals. A strong understanding of the relationship between gold and platinum can help an investor to make a wise decision regarding what to invest in. For inquisitive investors, one of the most important questions to ask is: what is the gold to the platinum ratio?

The Difference Between Gold and Platinum

The demand for gold has always been steady, as it is often easier to mine and produce. It is appealing to investors and institutions alike as a financial asset when compared to platinum. Platinum, however, is harder to mine and produce than gold. Though it has great industrial value, platinum’s price often fluctuates as it is vulnerable to supply and demand fluctuations. The prices of platinum heavily rely on economic conditions in contrast to gold.

Is Gold a Better Investment Than Platinum?

One of the biggest questions to ask about the gold to platinum ratio is which is better to invest in. Gold is far more stable than platinum, due to the mining and production processes. Prices of gold do not fluctuate as often as they do for platinum. Though it is often said that platinum is worth more than gold, the chance of a decrease in value is also possible.

Gold is also known to have a strong value as a currency. It is often viewed by investors to be more valuable than platinum. Gold can be easily liquidated and has ties to the stock market. Investors tend to capitalize in buying gold which serves as a replacement for traditional stocks and bonds. This is because gold serves as a fiat currency during economic downfalls.

What is a Gold to Platinum Ratio? 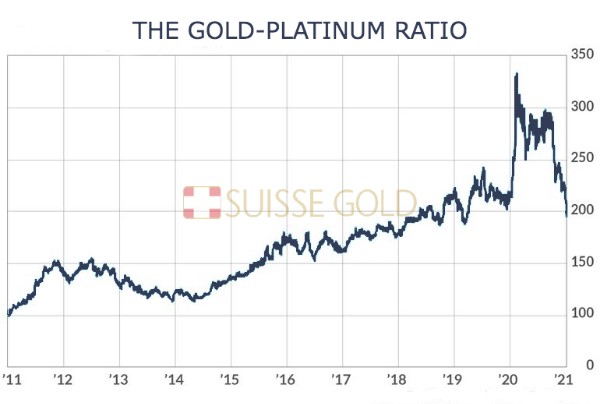 For example, when the ratio is greater than 1, then platinum is cheaper than gold. However, if the ratio is less than 1, it means platinum is worth more than gold. Investors can use the ratio to understand the price differences. It helps monitor trends, which may assist in making the decisions on whether to buy gold or platinum.

In recent times, gold continues to be popular as a financial asset, while platinum has its industrial applications, particularly in the jewelry and automotive industry. Both are very viable investable options. Precious metals are always an attractive prospect in financial gain, but when it comes to long-term investment goals, factor in the gold to platinum ratio before taking any decisive action.