Why is China Buying More Gold?

A few days ago, the People’s Bank of China published what some might consider a surprising figure.  Chinese officials announced that official gold holdings rose in December 2018.  This was the first rise in almost two years.  Overall, gold holdings increased to 59.560 million fine troy ounces.

The increase was not that much.  The question gold market observers should be asking themselves, though, is – “What is China thinking?” 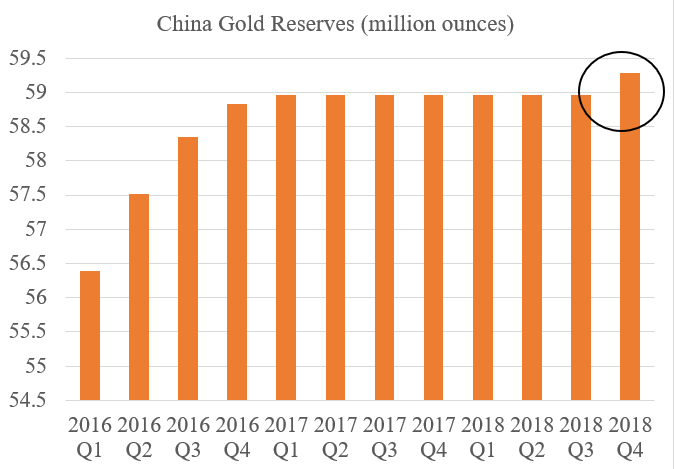 One colossal idea was brought to us by Alasdair Mcleod.  Mr. Mcleod speculates on China’s motives.  His idea: Chinese officials are preparing for the yuan to take over the dollar in China’s trade and having gold to back it up would make such a move achievable.

Is China trying to dump the dollar by accumulating gold again?

Could the US combat such a move?  The answer is probably not.  How could the US match such a sound money policy out of China?  China has healthy government finances, much better than the US.  Additionally, Chinese policymakers may be attempting to cement a relationship between the yuan and gold.  Ah, speculation.  In his own words:

“Whether China implements the plan suggested herein or not, one thing is for sure: the next credit crisis will happen, and it will have a major impact on all nations operating with fiat money systems. The interest rate question, because of the mountains of debt owed by governments and consumers, will have to be addressed, with nearly all Western economies irretrievably ensnared in a debt trap. The hurdles faced in moving to a sound monetary policy appear to be simply too daunting to be addressed.

Ultimately, a return to sound money is a solution that will do less damage than fiat currencies losing their purchasing power at an accelerating pace. Think Venezuela, and how sound money would solve her problems. But that path is blocked by a sink-hole that threatens to swallow up whole governments. Trying to buy time by throwing yet more money at an economy suffering a credit crisis will only destroy the currency. The tactic worked during the Lehman crisis, but it was a close-run thing. It is unlikely to work again.

Because China’s economy has had its debt expansion of the last ten years mostly aimed at production, if she fails to act soon, she faces an old-fashioned slump with industries going bust and unemployment rocketing. China offers very limited welfare, and without Maoist-style suppression, faces the prospect of not only the state’s plans going awry, but discontent and rebellion developing among the masses.

For China, a gold-exchange yuan standard is now the only way out. She will also need to firmly deny what Western universities have been teaching her brightest students. But if she acts early and decisively, China will be the one left standing when the dust settles, and the rest of us in our fiat-financed welfare states will left chewing the dirt of our unsound currencies.”

Overall, it’s possible that China could usher in a new gold era, an end to the almost 50 years of dollar reserve fiat currency.  On the surface, the idea seems implausible.  But, it’s not.  Time will tell whether the China has a trick up its sleeve