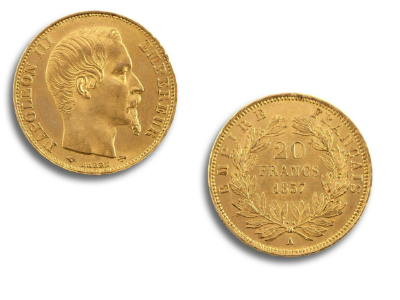 These coins were minted at the Paris mint.

The front of the coin features and image of Napoleon III.

The reverse of the coin features a laurel wreath with the words 'Empire Francais' around it. Inside the wreath is the coin's face value of 20 Francs, and the year of minting. France also produced the French Marianne or Rooster gold coin, which is a similar size.

Each coin is sold in a plastic slip.

The gold Napoleon coin is one of a number of European gold coins that were produced in the 1800s or early 1900s. The European coins generally have a weight of 5grams to 8 grams, instead of today's 1 ounce denominations. Examples include the British Sovereign, the French Rooster, the French Napoleon, the Danish Kroner and the Italian gold Lire.
Please contact us to sell gold Napoleons.
Price includes free insured storage in our vault for up to one year from purchase date.