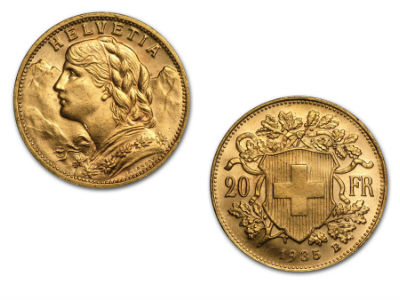 Each Vreneli gold coin Depicts an image of a woman "Swiss Miss" on the front, with the Swiss Alps in the background. As a result, sometimes the the Vreneli coins are colloquially called "Swiss Miss" coins. The reverse of the coins feature the Swiss Cross with an oak wreath surrounding it.

The Swiss Vreneli has a face value of 20 CHF.

Each coin comes in a plastic slip.

Swiss Vreneli gold coins are popular with European gold investors, along with some of the other European gold coins. These include the British Sovereign, the French Rooster, the French Napoleon and the Dutch Guilder. Traditionally, the European gold coins were made in smaller denominations of between 5 and 8 grams of gold.
This reduced size makes the coins more affordable, and as a result, many gold investors in Europe build a strategy of purchasing 1-2 Vrenelis or other similar European gold coins each month in order to build up a gold portfolio over time.
To view the gold price in grams, please click here.
Price includes free insured storage in our vault for up to one year from purchase date.