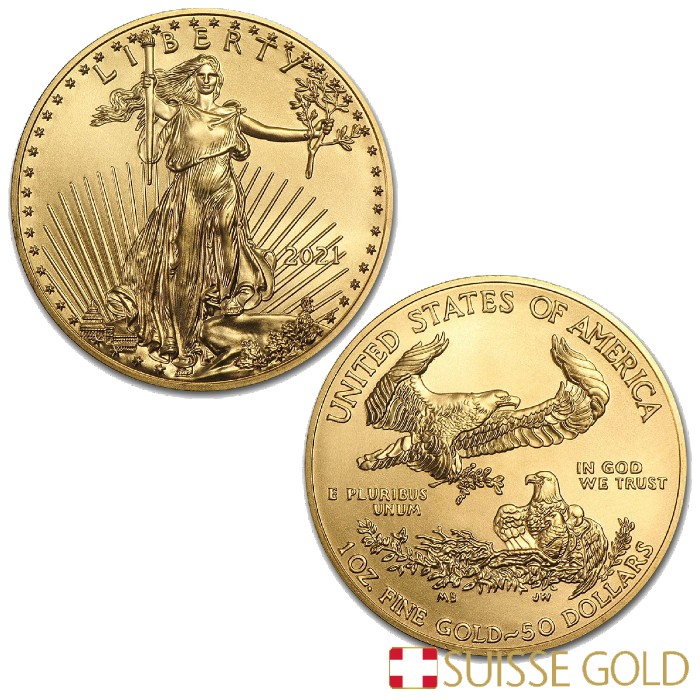 These gold American Eagle coins feature an image of Lady Liberty walking on the front. She carries a torch in her right hand, and an olive branch in her left. The sun rises behind her, signalling the beginning of a new day. To the right of her is the coin's year of minting - 2021. The word 'Liberty' is inscribed at the top.

The reverse side of each coin features an image of two Bald Eagles building a nest together. The male Eagle is bringing some branches back to the female, who is guarding the eggs in their nest, symbolic of the building of the American Dream. The words 'United States of America' appear at the top of the coin, with the words 'In God We Trust' to the right of the image. Each coin's face value of $50 USD is located at the base of the coin.

The American Eagle gold coin is 999 fine, making it a 22 karat gold bullion coin. Although some coins are purer, this coin is harder, making it less susceptible to scratching and damage.

The United States Mint is the official mint of the US government. They produce several gold coins, including the US gold Buffalo, the US gold Eagle and the St. Gauden coin. The Eagle is the most popular coin available from the mint, and it is also available in silver and platinum. It was made in palladium in 2017, but was not continued again in 2018. The American Eagle gold coin was first launched in 1986 at a time when investment into gold bullion was growing in popularity - at this time the Canadian Maple Leaf was the most popular gold coin. All American Eagle gold coins are required to be manufactured with American mined gold, making the products 100% American made and manufactured.

Gold coins have become an increasingly popular investment option for individuals looking for ways to secure their portfolios or diversify their investments. Initially gold invesing became trendy in the late 1970s, when Krugerrand coins were fashionable. However, these became scarcer with Apartheid, and then the Maple Leaf followed by the Eagle too its place. For many investors, owning gold coin allows for a physcial investment that you can store away or hold in your hands. This makes many investors feel that it is a more secure investment. Furthermore, the gold price typically increases during times of uncertainty or economic recession. This is also true during times of war. Many prudent investors like to hold a portion of their investments in gold or precious metals for this reason.

Gold Eagles are available for secure vault storage or for worldwide delivery.