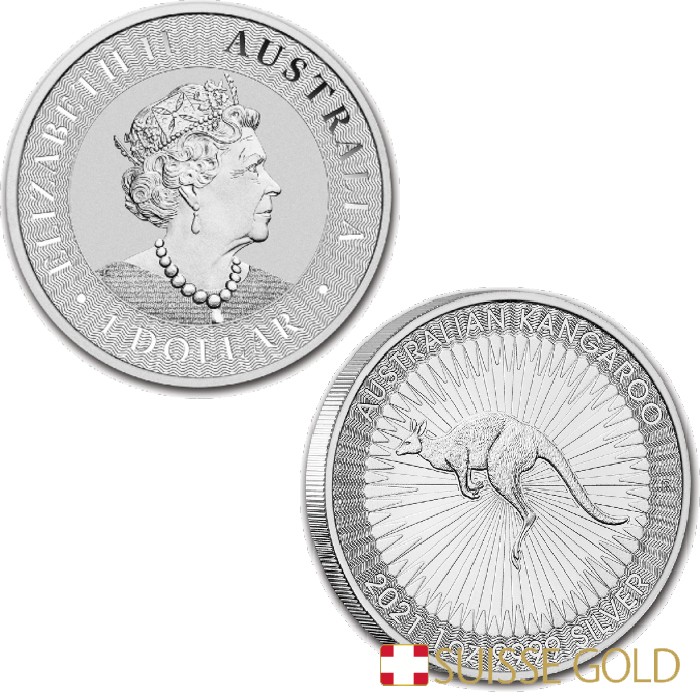 2021 Australian Kangaroo 1 oz Silver 99.9% Pure.
These coins are sold in new and uncirculated condition, direct from the Perth Mint.
The Kangaroo series is the most popular bullion coin series manufactured by the Perth Mint, and it is currently available in gold, silver and platinum. The silver Kangaroo coin was first released by the Perth Mint in 2016, making this the fourth year of production for the coin.
About the Kangaroo Series
The Perth Mint originally released a gold coin called the 'Gold Nugget' which was first introduced in 1986. However, this design was updated several years later to feature a Kangaroo instead, and the series has since been known as the Perth Mint Kangaroo series. The coin was only available in gold until 2016 when it was released in silver. In 2017, the coin was also released in platinum. The design of the silver Kangaroo coin remains the same each year, and only the year of manufacture is updated.
Design of the 2021 Silver Kangaroo
The silver Kangaroo coin features an image of Queen Elizabeth II on the front. Around the coins edge are inscribed the words 'Australia' and 'Elizabeth II', as well as the coin's face value, which is located at the bottom. Each silver Kangaroo has a face value of 1 AUD.
The reverse side of the coin features an image of a Red Kangaroo, the official animal of Australia, hopping. At the top of the coin is inscribed 'Australian Kangaroo'. At the bottom of the coin is it's metal type, fineness, weight and year of minting. Each silver coin weights one troy ounce, or 31.1 grams. The silver Kangaroo coin is 9999 fine, which makes it one of the purest silver coins available. Currently this coin is only available in the 1 Ounce size.

The silver Kangaroo coin may be purchased individually, in tubes of 25 pieces, or in mini-monster boxes of 250 coins. These coins are popular with silver investors, and the silver Kangaroo is a popular addition to the Perth Mint selection of coins already available.

About the Perth Mint
The Perth Mint was originally founded in 1899 as a way for the territory of Australia to be able to process and refine the gold that was being mined there. Their first modern gold coin was released in 1986, and since that time they have released a number of popular coins. In addition to the silver Kangaroo, the Perth Mint also sell a silver Kookaburra and a silver Koala coin, both of which are very popular. These coins are available in a range of sizes, including 1 KG sized coins.

The Perth Mint also produce the Platinum Platypus, and for a period of time also released the Palladium Emu, which has since been discontinued. Additionally, the Perth Mint release a Lunar Series of gold and silver coins, which feature an image of each animal from the Chinese Lunar calendar. Certain year issues of these coins have been known to show significant appreciation over the gold or silver price due to the limited numbers of coins minted in certain years, and the popularity of the designs.
SuisseGold.eu buys silver Kangaroo coins from clients at favourable rates. Please contact us to sell your coins.
Price includes free insured storage in our vault for up to one year from the purchase date.