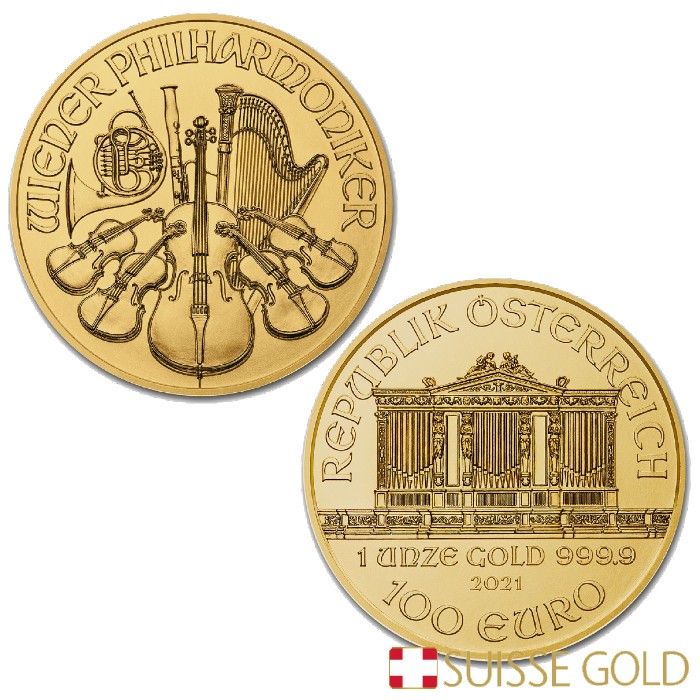 About the Gold Philharmonic Coin

The gold Philharmonic coin was first launched by the Austrian Mint in 1990. The coin was initially only launched in gold, and was released in Schilling denominations. However, in 2000 Austria adopted the Euro as its official currency, and the coin's legal tender value was updated to reflect Euros instead. To date, Austria is the only country to launch an official one ounce gold coin in Euro denominations. The United Kingdom also release the British Britannia coin, however this is backed by Pounds Sterling, not by Euros.

Design of the Philharmonic Gold Coin

The front of each coni features the words 'Wiener Philhlarmoniker' (Vienna Philharmonic) at the top of the coin. An image of a number of instruments used by the Philharmonic are pictured below.

The reverse side fo the coin features an image of the organ located in the concert hall. The words 'Republik Osterreich' are located at the top of the coin. Beneath the image are the coin's size, weight, purity, year of minting and face value.

The Philharmonic series is also available in 1/2 Ounce, 1/4 Ounce and 1/10 Ounce sizes in gold.