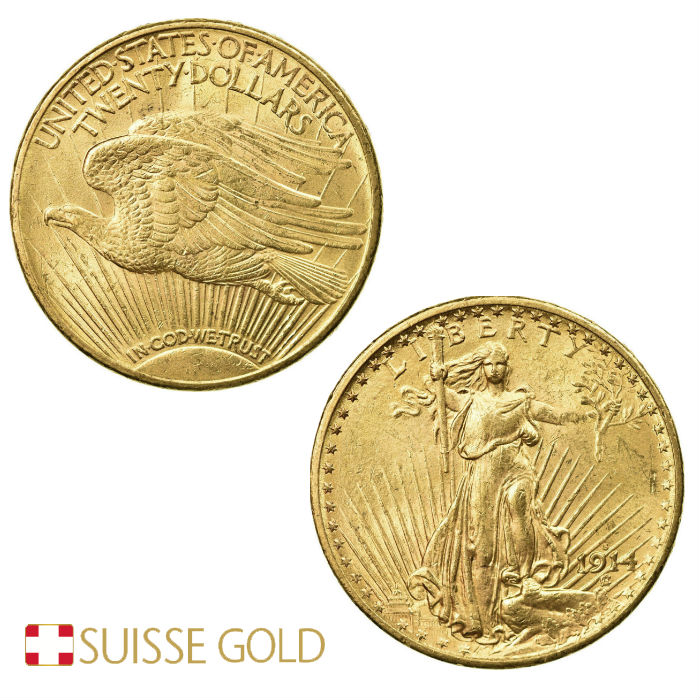 History of the St. Gauden Coin

The St. Gaudens double Eagle gold coin is a coin that was produced by the United States Mint from 1907 to 1933. The coin was used as inspiration for the design of the American Eagle gold coin, which was introduced in 1986. The coin is named after its designer, Augustus Saint Gauden. These coins were predominantly used for trade internationally, until their minting was stopped in 1933. The design of these coins was inspired by US President Roosevelt, who felt that American coinage was dull and unartistic. He sought to improve the design of the coins by adding an artistic features. One of the first coins to display this was the gold St. Gauden. The coin quickly became popular
The coin was first issued in 1850, but with a different design on the front. Initially, the St. Gauden coin was released as a response to the increase in gold bullion as a result of the California Gold Rush.
The coin's minting ceased in 1933, in response to new Federal Regulations. The United States Treasury was under order not to release gold or gold bullion. At this time, Treasury Secretary Morganthau decreed that all gold coins must be turned into the US Treasury in exchange for paper currency. It was illegal at this time to hold gold coins. Despite this, one gold ownership was legalised again, many St. Gaudens reappeared in circulation. Many of these coins were held in European bank vaults or were simply not turned into the Treasury as instructed.
Design of the Double Eagle St. Gauden
The front of the St. Gauden coin coin features an image of Lady Liberty carrying a torch in her right hand, and an olive branch in her left. The sun is rising in the background behind her. the word 'Liberty' is written above her.

The reverse of the St. Gauden gold coin features a flying Eagle, again, with the sun rising in the background.

The St. Gauden double Eagle has a face value of $20 USD. Each coin contains 30.5 Grams of gold bullion.
Coins Produced by the United States Mint
The United States Mint also produces the American Eagle coin series, which is available in gold, silver, platinum and palladium, and the American Buffalo series, which available in gold only. Both the American Eagle and Buffalo series are recent releases, which have been in continuous circulation since 1987.
Please contact us to sell gold St. Gaudens.
View the current spot gold price.