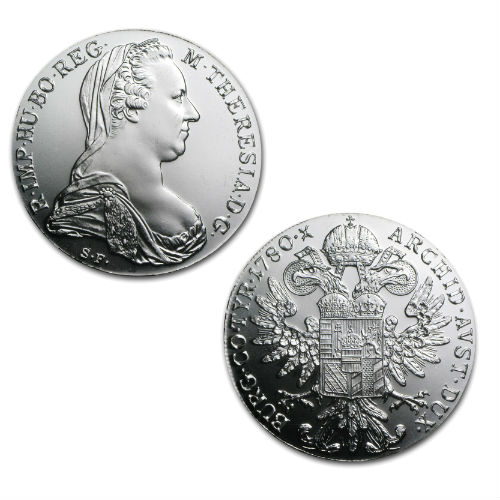 These coins feature the same design as the silver Thaler coin of Austria that was issued in 1741.

Each coin contains approximately 0.75 ounces (23.4 grams) of silver. These coins have a lower purity than modern coins, as they are designed to copy the silver content of the original coin. These coins have a total weight of 28.07 grams, and a silver fineness of 833,3.

The silver Maria Theresa coin has been restruck by the government of Austria since 1857.

Each coin comes in its own unique blister pack provided by the Munze Osterreich.

The front of the coin features an image of Maria Theresa. The reverse shows an image of the Austrian imperial crown with two eagles at the top - one eagle looks east and the other west.

The silver Austrian Thaler was considered a legal tender coin in Austria until 1858, however, it continued to be used as curreny in many African countries up to the second world war.

These coin are popular with individuals looking to collect silver coins.

If you have Munze Osterreich (Austrian Mint) silver coins or bars that you wish to sell, please contact us.

The price includes free Swiss vault storage for up to one year.