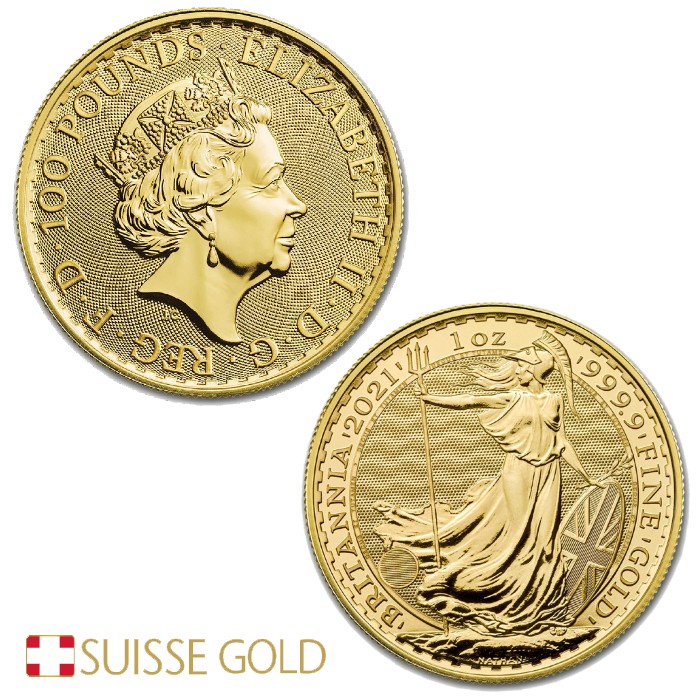 Brand new and uncirculated 2021 issue British Britannia gold bullion coins.
1 Ounce, 9999 fine investment grade gold coins.
Design of the Gold Britannia
The design of the gold Britannia coin features an image of Queen Elizabeth II on the front, with the words '100 Pounds' and 'Elizabeth II' on the top. The reverse side of the coin features an image of Lady Britannia walking with a trident in one hand, and a shield featuring the Union Jack in the other. An olive branch is also in her hand. Lady Britannia was an image that was first created when the British Isles were part of the territory of the Roman Empire - the Islands were referred to as 'Britannia'. Lady Britannia has appeared on several coins in the history of the British Empire, but none were recent.
Investing in Gold Britannias
The Britannia coin contains 9999 fine investment grade gold bullion, which makes these coins 24 karat, and recognised worldwide as investment-grade bullion coins. They also carry advantages for UK investors, as they are Capital Gains Tax exempt.
The Britannias are the official gold coin of the UK and is manufactured by the Royal Mint. It is the only long-term ounce denominated gold coin currently issued by the UK. The Royal Mint also release the Queen's Beasts series, however, this series releases 2 gold coins annually over a period of 5 years. The Royal Mint also release the Sovereign gold coin, which weighs 7.3 grams.
Why Buy Gold Coins?
Gold has been popular as an investment for hundreds of years, but more recently, it became popular to invest in gold coins and bars in the 1970s, during periods of heavy inflation. Gold retains its value, particularly against fiat currencies which decrease in value as more money is printed. Gold also appreciates during times of economic difficulty or uncertainty, such as war. For this reason, many view gold as a really good hedge, and necessary to include as part of any diversified portfolio.
Gold coins are mostly available in 1 Ounce or fractional denominations, and this allows investors to both buy and sell their gold incrementally, giving them greater control over their investment. Furthermore, gold coins are issued by official governments, like the United Kingdom, and this provides investors with greater security knowing that they are buying a quality investment.
Clients of SuisseGold.eu may purchase 2020 gold Britannia coins for VAT-exempt Swiss storage or for worldwide delivery. Coins purchased for storage are given one year free of charge, and SuisseGold.eu guarantees the buyback of any gold coins from storage.
Please contact us if you have any gold Britannia coins you wish to sell.
Price includes free insured storage in our vault for up to one year from purchase date.