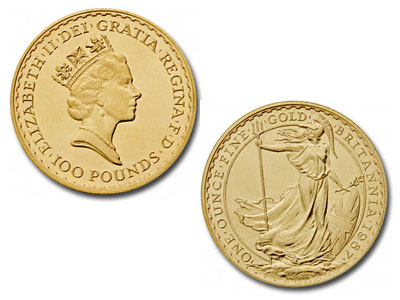 The coin's front features an image of Queen Elizabeth II, which is standard for all legal tender currency issued within the United Kingdom. Encircling the coin are the words 'Queen Elizabeth II Dei Gratia Regina'. At the bottom of the coin is its face value of 100 Pounds Sterling.

The reverse of the British Britannia gold coin pays hommage to the country's history as part of the Roman Empire. In the center of the coin is an image of Lady Britannia, and image that was first used to symbolise the British Isles by the Roman Empire around 54 AD. Lady Britannia is holding an olive branch and a shield in one hand, and a trident in the other. She also holds a shield which features an image of the British Flag. Encircling the coin are the words 'One Ounce Fine Gold, Britannia', and finally the coin's year of minting.

History of the Gold Britannia Coin
The Britannia gold coin was first introduced by the Royal Mint in 1987 in gold. Coins produced until 2013 had a purity of 999, and thereafter this was updated to 9999. The British Britannia gold coin is available in one ounce and fractional sizes, including 1/20 oz, 1/10 oz, 1/4 oz and 1/2 oz.
The coin was immediately popular amongst investors, and in 1997 the Mint launched the Britannia coin in silver. In 2017, the Britannia series was also launched in platinum.

About the Royal Mint
The Britannia gold coin is produced by the Royal Mint. The Royal Mint is the official mint of the United Kingdom, and is responsible for minting all official coinage in the country, including legal tender bullion coins. The mint is one of the oldest in the world, opening as the London Mint back in 886AD. The mint became grew to a substantial size by the 1800s, and in the 1800s, branches of the Royal Mint were set up in Canada (this later became the Royal Canadian Mint), and in Australia (this became the Perth Mint). The Royal Mint manufactures a number of bullion products on behalf of the UK. These include the Britannia coin series, which is available in gold, silver and platinum, the British Sovereign coin, which is available in gold, and a number of special edition coins. These include, among others, the Royal Arms series and the Valiant series. The mint also manufactures a Britannia bar, which is available in gold, silver and platinum.
Where to Buy Gold Britannias
Suisse Gold sells both current year and back year gold Britannias. Coins are available individually and in wholesale tubes of 10 or 20 coins. Clients of Suisse Gold can order gold Britannia coins for worldwide delivery and for secure VAT-free Swiss storage. For clients looking to invest in gold coins, the gold Britannia is a popular option. This is particularly true for those who are UK residents, as gold British Britannias have no VAT and no capital gains tax payable.
To sell gold Britannia coins to SuisseGold.eu, please contact us here.
Price includes free insured storage in our vault for up to one year from purchase date.