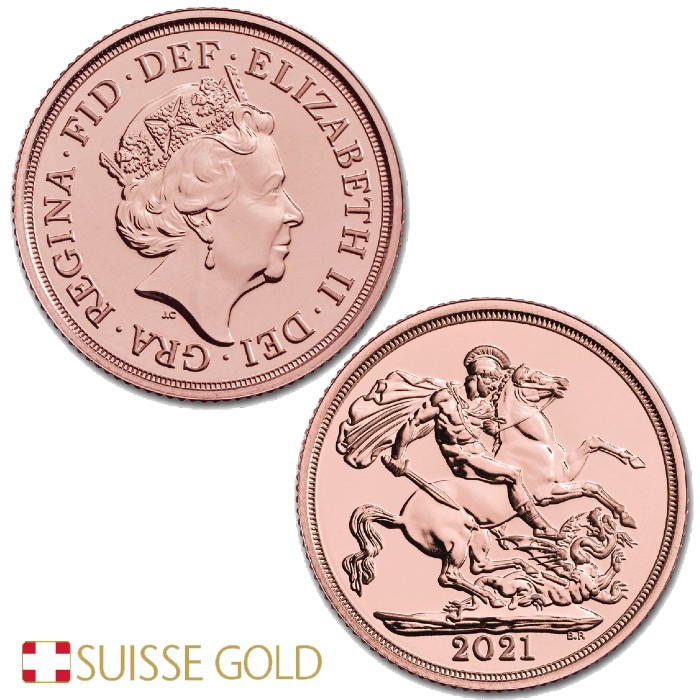 Newly released 2021 Queen Elizabeth II Sovereign Gold Bullion Coin.
Each coin contains 22 karat gold bullion.
Brand new and unreleased 2021 issue coins.
Design of the 2021 Gold Sovereign Coin
The 2021 Gold Sovereign features an image of Queen Elizabeth II on the front. The reverse of each coin features an image of King George slaying a dragon with his sword while riding on a horse. At the bottom of each coin is its year of minting. The design of the gold Sovereign remains the same each year, although the image of the Sovereign monarch is updated occasionally. Because the Sovereign gold coin series has been in circulation since 1817, several British monarchs have featured on the coin.
History of the Gold Sovereign.
The gold sovereign coin has been in circulation since 1817 and was standard British currency up until 1932 when Britain abandoned the gold standard. At the time of the British Empire, these coins were particularly popular, and used for trade at ports around the world, including in India, Australia and Canada. Because these coins contain gold bullion, their value was recognised worldwide.
Today, the British Sovereign is used more for investing and collecting than for trade, although it is still backed by the United Kingdom. The British Sovereign also comes in half Sovereign, quarter Sovereign and double Sovereign sizes, and is minted only in gold. The most popular size is the full Sovereign.

Sovereigns are currently produced by the Royal Mint, although historically other mints have also produced the coin. In addition to the Sovereign, the Royal Mint also produces the British Britannia and the Queen's Beasts gold coins.

Buying Gold Sovereigns
The British Sovereign gold coin contains 7.3 grams of gold bullion. These coins are very popular among gold investors in Europe, and particularly UK residents, as no Capital Gains Tax is payable on any profits on the coins. Furthermore, they are recognised worldwide, particularly in Commonwealth nations. Many investors looking to buy gold coins as part of an investment plan regularly buy gold Sovereigns in regular increments in order to build up a precious metals portfolio over time.
Gold sovereigns are available to clients for delivery worldwide and for storage in Switzerland.
Clients can also sell gold sovereigns to SuisseGold.eu. For more information, please click here.
To view the gold price per gram, please click here.