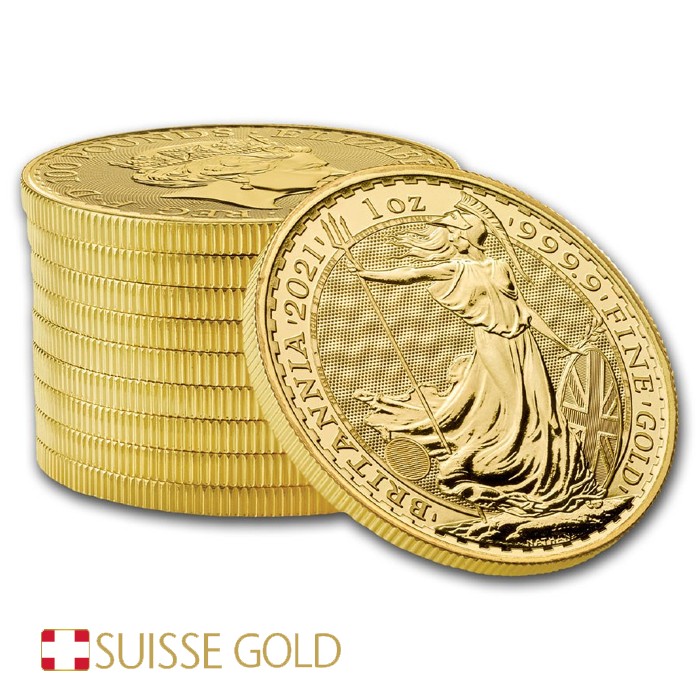 Newly released, uncirculated 2021 gold British Britannia 1 Ounce (oz) coins.
These coins are in brilliant, uncirculated condition.
Investing in Tubes of Gold Britannias
The British Britannia gold coin is one of the official gold coins of the United Kingdom, along with the gold Sovereign. These coins are popular with gold investors worldwide, and many investors like to purchase these coins in larger quantities. For this reason, SuisseGold.eu offer gold 1 Ounce Britannia coins in both tubes of 10 coins, and in monster boxes of 100 coins. Tubes of 10 Britannia coins are sold at a lower premium to individual coins, making them a better option for investors looking to buy gold coins in larger quantities.
The Britannia coin is a great choice for gold investors. Gold Britannia coins are recognised worldwide for their high quality, both in terms of design and in terms of the coin's quality of manufacture. These coins are 9999 fine, making them some of the purest gold coins available on the market. These coins also have a face value of £100 GBP, which is backed by the government of the United Kingdom.
Design of the Gold Britannia Coin
The front of each Britannia coin, like all official coinage, features an image of Queen Elizabeth II on the front, with the words 'Elizabeth II' on the front. The coin's face value of £100 GBP is also on the front of the coin.
The reverse side of the coin features Lady Britannia walking. She carries a trident in her right hand. In her left hand are both an olive branch and a shield, which features the Union Jack design on it. The sun rises behind her. Lady Britannia first appeared on coinage when the United Kingdom was part of the Roman Empire, around 30 AD. At that time the British Isles were called 'Britannia' by the Romans. Lady Britannia has since appeared on UK coinage several times since then. The British Britannia gold coin is the official gold coin of the government of the UK, and the only official one-ounce gold coin.
Britain's Official Gold Coin
The gold Britannia coin was first launched in 1987 by the Royal Mint. Buying and storing gold Sovereign coin has always been popular in the UK, and around territories that belonged to the British Empire, including India, Australian and Canada, where British Sovereigns were also manufactured and used to trade (due to their gold content). However, in the 1980s, it became fashionable worldwide to buy and invest in gold coins. This trend started with the launch of the Krugerrand, followed by the Maple Leaf. Britain introduced the Britannia, which was only available in gold at that time. The gold Britannia was the only one-ounce gold coin to be produced by the UK government.
Due to the popularity of the gold Britannia, the UK launched the Britannia series in silver in 1997, and in platinum in 2017.

Gold Britannia coins are available in one ounce and fractional ounce sizes.

Please contact us if you have one-ounce gold Britannia coins that you wish to sell.