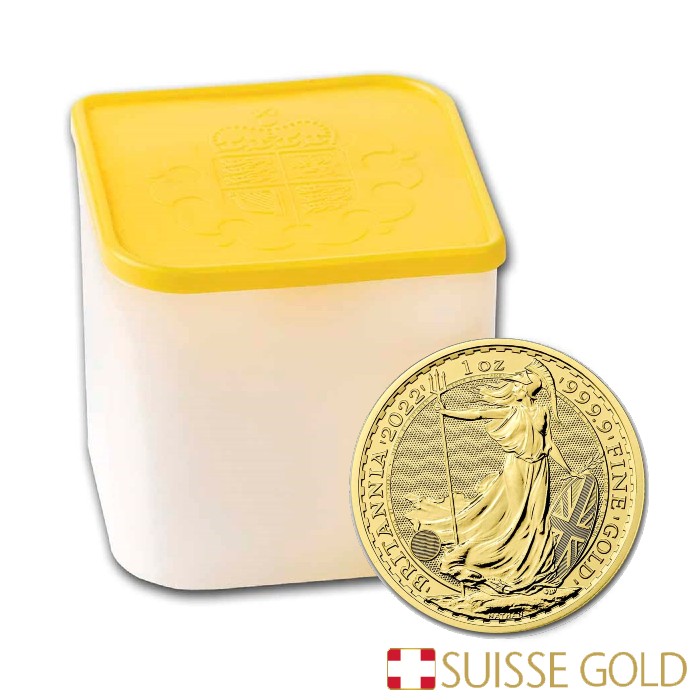 What is a Gold Britannia

The Britannia gold coin is the official gold coin of the United Kingdom, and it is the most popular 1 Ounce gold coin currently manufactured by the Royal Mint. Each coin has a face value of £100 Pounds Sterling. Each coin features an image of Her Majesty Queen Elizabeth II on the front. the coin's legal tender value is also located on the front of the coin. The reverse side of each coin features an image of Lady Britannia. The image of Lady Britannia was first used on Roman coinage, during the period when the Roman Empire expanded up to Hadrian's Wall, and included England. Lady Britannia is standing in a long robe, holding a trident in one hand. In her other hand are both an olive branch and a shield. Encircling the coin in very small letters are the words 'Decus et Tutamen'. These latin words translate to 'An ornament and a safeguard'. These words have been included on British coins since the mid 1600's, and are meant to act as reassurance to the public that the coin is not counterfeit or fake. Today, the phrase can also be seen on the outer rim of the Pound coin.

What is the Royal Mint?

The Royal Mint is the official mint of the United Kingdom, and it is responsible for making all legal tender bullion coins on behalf of the UK government. The original and most famous gold coin manufactured by the Royal Mint is the gold Sovereign coin, which has been in circulation since the 1800s, and was used worldwide throughout the British Empire at trading posts. This is because the coin's gold content made its value easy to calculate. The coin was so popular, it was even manufactured Australia, Canada and India.

The gold Britannia coin was first issued in 1987. In the 1980s, retail investing in precious metals grew very popular. As a result, many countries began to issue their own legal tender bullion coins. These included the gold Maple Leaf which is produced in Canada, and the gold Philharmonic, which is produced in Austria. The British Britannia series is the only series issued by the Royal Mint that is available in gold, silver, and platinum.

The Royal Mint also issue a number of other gold coins, however these tend to be limited editions or limited series. These include the Queen's Beasts series of 10 coins, the British Valiant gold coin and the British Royal Arms series. All of these coins are available in both gold and silver.

These coins are available to clients worldwide. Coins may be purchased using bank transfer or cryptocurrency. If you have any further questions, please do not hesitate to contact us.