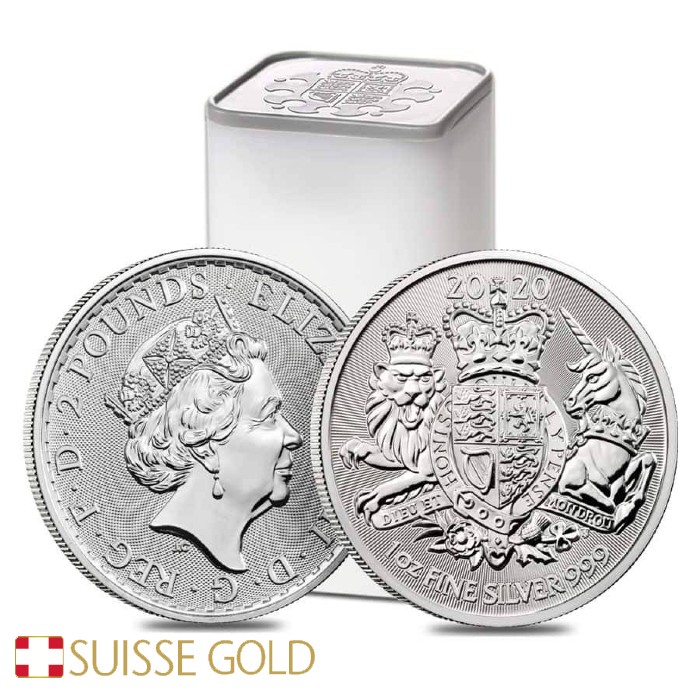 The British Royal Arms silver coin was first launched in 2019, as part of the Royal Arms series. This series of coins is available in gold, silver and in platinum.

The front of these coins feature an image of Queen Elizabeth II, as is found on all legal tender coinage in the United Kingom. The edge of the coin features the words 'Elizabeth II', and the coin's face value of £2 GBP.

The reverse side of the coin features the British Monarchy's official crest, with the Royal Crown at the top. To the left of the crest is the Lion of England, and to the right is the Unicorn of Scotland. At the top of the coin is its year of minting, 2020. At the bottom of the coin is its size of 1 Ounce, and its purity of 999.

The silver Royal Arms coin is available in a one ounce size individually, in a tube of 20 coins, and in a monster box of 500 coins. The coin is also available in a 10 ounce size. Like the silver Britannia series, these coins are Capital Gains Tax exempt for all UK residents, making them a very popular option for British residents.

The Royal Mint release a number of silver coins. The silver Britannia coin is its most popular series, and this is available as a one ounce coin, and individually or in monster boxes. The UK Mint also release a silver Valiant coin, which is 10 Ounces. The design of the silver Valiant is similar to that of the gold Sovereign, and compliments the Sovereign, which is not available in silver.

For clients whiching to invest in these coins without paying VAT up front, SuisseGold.eu offer VAT-exempt storage located in Zurich, Switzerland. Storage is included free of charge for all orders for the first year. Clients that select storage have the option to collect their order, have it delivered, or sell it back to SuisseGold.eu at favorable rates at any time.

Please contact us if you have questions about Royal Mint silver bullion.