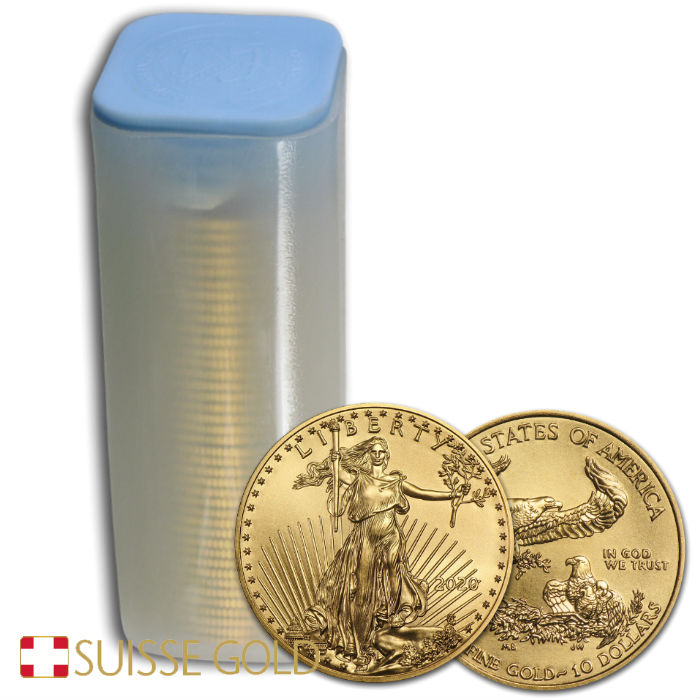 A History of the Gold Eagle Series

The American Eagle coins series was first launched by the United States government in 1986 in both gold and in silver. Silver Eagles were launched as a 1 ounce coin, and the gold Eagle series was launched in 1 Oz and fractional ounce denominations. The Platinum American Eagle coin was launched in 1996. In 2017, the US Mint also launched a palladium Eagle, however this was not released again in 2018.
The gold Eagle coin is unique in that it is required by United States law to be minted only from gold that is mined within the United States. This means that each gold Eagle is 100% made within the United States.
The gold Eagle coin was introduced into the market after the success of the Canadian Maple Leaf and the South African Krugerrand gold coins, which were introduced in 1979 and 1967 respectively. The coin was launched in response to the increasing demand for retail investment gold and silver bullion products.
Design of the 1/4 Oz Gold Eagles
The quarter ounce gold American Eagle coin features an image of Lady Liberty walking with the sun rising behind her. She carries a torch and an olive branch in her hands. The reverse side of the coin features an image of two Bald Eagles building a nest together, symbolic of the American Dream. The Bald Eagle is America's national bird.
Each 1/4 Oz Gold Eagle has a face value of $10 USD, and contains 999 fine investment gold, making it a 22 karat gold coin. Coins that are 22 karat have an alloy, such as silver or copper, added to them to improve the coin's hardness and make it less likely to scratch.
Buying Wholesale Gold Eagles
Wholesale tubes of 40 gold 1/4 Ounce American Eagle coins are the perfect options for bullion investors looking to buy gold coins in fractional sizes. These coins are sold at a lower premium than individual 1/4 ounce gold coins, allowing clients to save on their investment by making a wholesale purchase.
American Eagles are recognised worldwide, and have a US Dollar legal tender value, both of which make them stable investment options for individuals looking to purchase gold coins. Gold Eagles are manufactured to a very high standard that is recognised worldwide. The American Eagle series is one of the most prominent bullion coins available in the precious metals market.
These coins are available for VAT-exempt secure vault storage located in Zurich, Switzerland, or for delivery. Clients may arrange payment in any of 15 currencies.
Please contact us if you have any 1/4 ounce American gold Eagle coins that you would like to sell.
Price includes free insured storage in our vault for up to one year from purchase date.