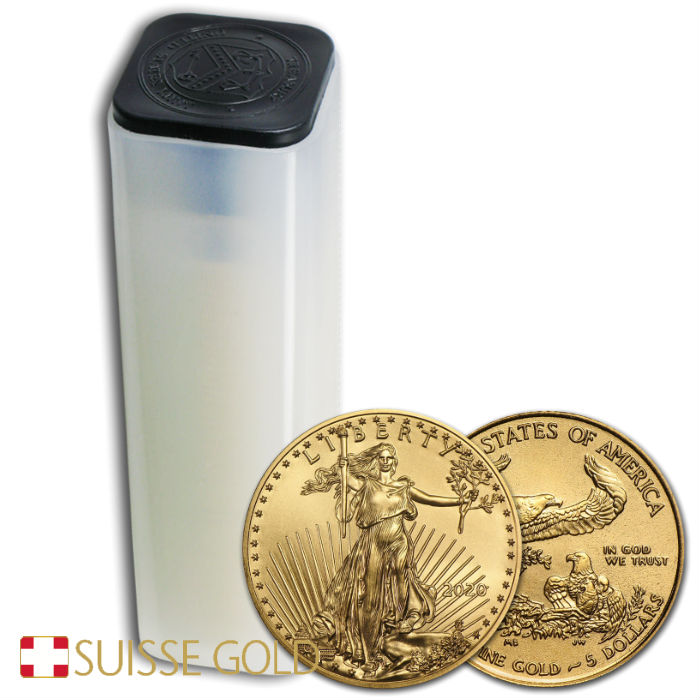 Investment grade 1/10 Ounce gold American Eagle coins
These unciruclated gold Eagles are being sold at low-margin, low-premium wholesale rates in tubes of 50 coins.
History of the American Eagle Coin
The American Eagle gold and silver coins were first launched in 1986, followed by the platinum American Eagle which was launched in 1997, and the palladium Eagle which was launched in 2017. The Eagle series was the first investment grade precious metals coin series to be launched by the US Government. In 2006 the Gold Buffalo series was launched, however this was only available in 1 Oz size, and was never as mainstream as the American Eagle series.
Per the terms of United States law, all gold coins manufactured with a US Legal tender value (government backed) must be manufactured using US mined gold bullion. Therefore, all gold bullion coins issued by the United States are 100% made in the USA. All American Eagle gold coins contain 999 fine gold bullion, making them 22-karat gold bullion coins.
The United States Mint launched the gold Eagle series in response to an increasing demand for investment grade bullion coins in the retail market. The Rand Refinery in South Africa was the first to introduce retail gold coins, with the Krugerrand, which was launched in 1967.
Design of the 1/10 Oz Gold Eagle
The design of the gold Eagle coin remains the same as previous years. The front of the coin features an image of Lady Liberty walking, with a torch in one hand and an olive branch in the other. The reverse of each coin features an image of two Bald Eagles building a nest together. The male Eagle is bringing branches back to the female, who is sitting on the eggs. Each coin has a legal tender value of $5 USD.
Buying Wholesale gold Eagles
For investors that wish to buy gold coin in small denominations, wholesale gold Eagles are a great option. They are sold at a low-premium, and are recognised worldwide as one of the most prominent and popular gold coins available. Wholesale gold Eagles may be purchased for delivery or for secure vault storage located in Zurich, Switzerland. For clients using secure vault storage, we offer guaranteed buyback.
Please contact us to sell 1/10 Ounce gold Eagles.