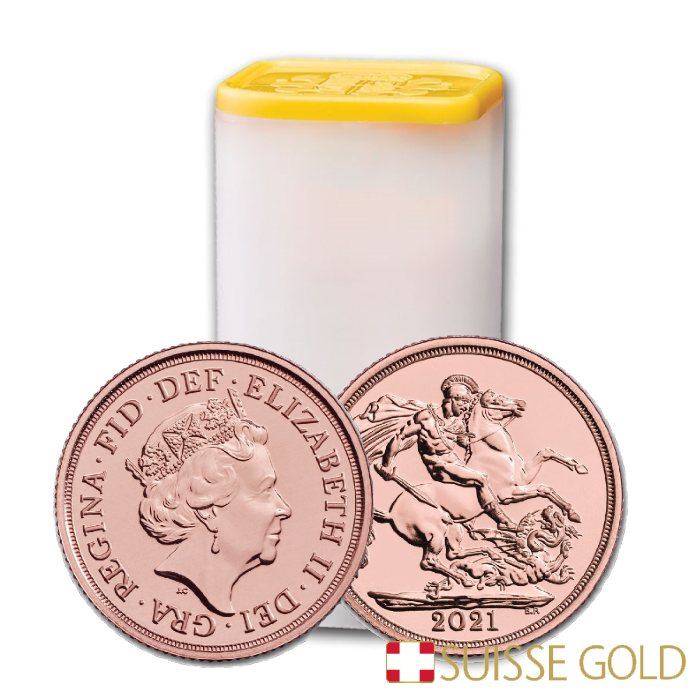 About the Gold Sovereign
The British Sovereign was initially introduced into the market in 1817, and until 1932, it was fully circulated as a British gold standard currency. It was used in the United Kingdom, and also throughout the world as one of the main currencies for trade. Its gold content gave it an accepted value worldwide. Trade in gold Sovereign coins became so popular that in the 1800s, the British Empire set up mints in India, Australia and Canada, all of which minted gold Sovereigns to facilitate trade.

Today, the coin is primarily used as an investment and collectable British bullion coin. However, this is one of the United Kingdom's most popular gold bullion coins for investors worldwide.

The British Sovereign coin also comes in half Sovereign, quarter Sovereign and double Sovereign sizes, and is minted only in gold. The full Sovereign is the most popular size.

Sovereigns are currently produced by the Royal Mint. In addition to the Sovereign, the Royal Mint also produces the British Britannia and the Queen's Beasts gold coins.
The British Sovereign gold coin is popular worldwide. Many gold investors looking to buy gold coins in small increments over time purchase Sovereigns, as they contain only 7.3 grams of gold. Furthermore, for UK residents these coins carry not capital gains tax or VAT. These coins are available for worldwide delivery and Swiss storage.
Check today's gold spot price here.
For clients looking to sell gold sovereign coins, please contact us.
Price includes free insured storage in our vault for up to one year from purchase date.