Market Update, January 13, 2021
Gold prices increased this week as the precious metal reports a 0.55% increase with its value incre...
Market News
Norilsk Floods Cause an Increase in the Palladium Price Does the EU Market Affect Silver Prices The Gold-Platinum Ratio Suggests Opportuntiy What Countries Produce the Most Gold Per Annum? Can Gold Hedge Against Inflation? Brexit or Gold? Looking at Global Interest Italy's Debt Levels Debt's Negative Yields are Concerning Europe's Financial Crisis- Can they Pull Through? US-China Trade Wars Benefit Gold Holders Russia's Massive Gold Accumulation Germany’s Banks Downgraded Due to Risk Concerns Why is the Palladium Price Soaring? ECB Pays European Banks 1% to Give Them €174 Billion The American Eagle gold coin was initially released by the United States mint in 1986. The coin is manufactured in 4 sizes - 1 Ounce, 1/2 Ounce, 1/4 Ounce and 1/10 Ounce. The American Eagle gold coin is 999 fine investment grade gold bullion, or 22 Karat. Each coin features the image of Lady Liberty on the front, running with an olive branch in one hand and a torch in the other. A small depiction of the US Capital building is located on the bottom left of the coin. The reverse side of the coin features an image of a male Eagle bringing some branches to a female eagle who is sitting in her nest. In addition to the gold American Eagle series, the US Mint also produces the American Eagle coin in silver and in platinum.

A History of the American Eagle Gold Coin

The design of the American Eagle coin has always remained the same. The design for the gold Eagle coin was modeled after the gold St. Gauden coin, which is still available but no longer manufactured by the US Mint. The coin features a similar image of Lady Liberty on the front of the coin. American Eagle gold coins have been in continuous circulation since they were launched in 1986. 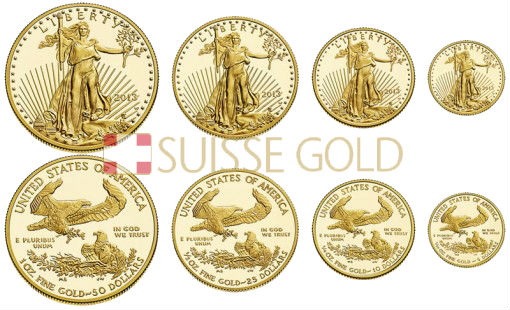 Each gold Eagle coin features an image of Lady Liberty on the front, modeled after the St. Gauden gold coin designed by Augustus St. Gauden. Lady Liberty carries a torch in one hand and an olive branch in the other, with the sun rising behind her.