A History of Canadian Bullion

Canada has always been at the forefront of the investment precious metals industry. The country introduced the gold Maple Leaf coin in 1979, at the time when Apartheid greatly curtailed access to gold Krugerrand. Until the point, the Krugerrand was the only major investment gold bullion coin available, with more than 3,000,000 being sold in 1979 alone. The Canadian Maple Leaf coin quickly became very popular and recognised worldwide as an investment grade gold coin. In 1988 the Royal Canadian Mint launched the platinum Maple Leaf. This was the first country to launch a platinum coin with the exeption of the platinum Noble, that was produced on behalf of the Pobjoy Mint, a privately owned mint in Surrey, UK.

The Royal Canadian Mint is also the only mint to launch a 99999 fine gold bullion coin, and the only to regularly sell a palladium coin, with the palladium Maple Leaf. Products sold by the Royal Canadian Mint are recognised and accepted worldwide, as the mint is also responsible for manufacturing 'good delivery' bars for the London Bullion Market Association, the COMEX in New York, and the TOCOM in Tokyo.

Platinum coins have become an increasinly popular investment options for precious metals investors worldwide. Total annual platinum production is less than 10% of that of gold, making the metal far more succeptible to price fluctuations and swings. Furthermore, the rarity of the metal also makes it a good option. Platinum coins are manufactured by a range of government mints worldwide. These include the Royal Mint, the Royal Canadian Mint, the United States Mint and the Austrian Mint. All platinum coins are backed by governments and have a legal tender value. 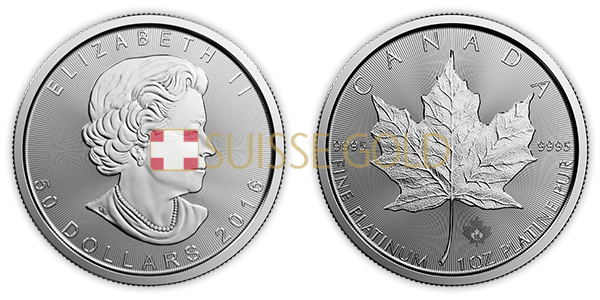 The Canadian Maple Leaf platinum coin is part of the Maple Leaf series, which was launched by the Royal Canadian Mint in 1979. The platinum coin was first launched in 1988. Until 2002 the coin was also manufactured in fractional denominations. Today it is only available as a 1 Ounce coin. These coins are the official platinum coin of the government of Canada. They are popular worldwide, but have a particularly large following in Japan.

All Platinum Maple Leafs are available for VAT-exempt secure Swiss storage or for delivery. Clients may arrange payment in any of 15 currencies.